On May 11, after three years, Radiance, Cleveland State University’s premier fundraising event, returned to the campus ballroom to...

Kristen Reyes quite literally wants to the leave the world a better place. “I believe that we’re all stewards of...

Beneath his soft-spoken, self-effacing demeanor, David Hobe, CSU B.B.A. ‘72, is a courageous, visionary entrepreneur. He and Jerry Lucas,...

Your Legacy. Our Future.

Cleveland State is pleased to acknowledge the donors who make generous commitments to the University by their annual leadership support, lifetime giving and planned gifts.These donors are partners with the University as it grows in excellence and thrives as a leader in higher education. To honor and acknowledge those who advance Cleveland State University, the CSU Foundation has created several recognition societies.

The President’s Cabinet recognizes donors whose generosity to CSU totals $1 million or more during their lifetimes.

The Scholars Circle recognizes donors whose lifetime giving has reached $10,000 to $99,999. 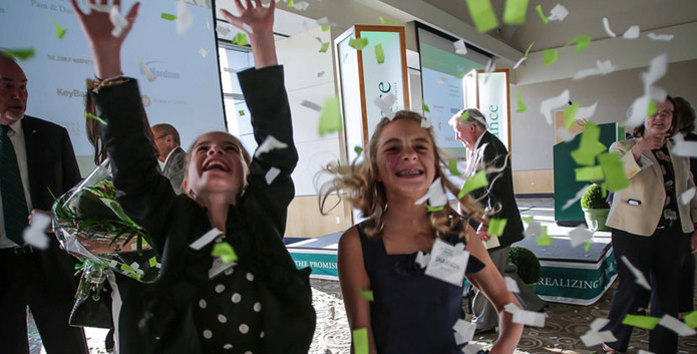 The Legacy Society recognizes alumni and friends who have included Cleveland State University in their estate plans.  Such planned gifts include will commitments; naming the University Foundation as beneficiary of a trust, life insurance policy, or retirement plan; or creating life income gifts including charitable gift annuities or charitable remainder trusts.  Cleveland State University is pleased to honor those who demonstrate commitment to future excellence at the University by providing support for tomorrow.

The Dean's Circle recognizes alumni and friends who make an annual leadership investment of $1,000 or more.  Membership is based on the University's fiscal year (July-June) and is renewable. The Dean’s Circle has a tiered structure:

Donor Recognition Society members enjoy the satisfaction of knowing they are helping to support Cleveland State University and its students. They are making an investment that truly pays dividends.

As leadership donors, members receive regular communications from the Cleveland State University Foundation, donor listing in CSU’s Annual Report and invitations to special events throughout the year. Donor Recognition Societies bring together those who have expressed a common interest in the mission and future of the University.

Thank you for your support.