When he began teaching in the Department of Psychology at Cleveland State University (CSU) in 1973, Professor Emeritus David...

Beneath his soft-spoken, self-effacing demeanor, David Hobe, CSU B.B.A. ‘72, is a courageous, visionary entrepreneur. He and Jerry Lucas,...

Kristen Reyes quite literally wants to the leave the world a better place. “I believe that we’re all stewards of...

When he began teaching in the Department of Psychology at Cleveland State University (CSU) in 1973, Professor Emeritus David M. Grilly did not set out to write a book, let alone one that would transform the study of psychopharmacology. Nor did he plan to transform CSU’s Department of Psychology, but—thanks to both his tenure at CSU and the success of his book “Drugs and Human Behavior” (later changed to “Drugs, the Brain and Behavior”)— that is exactly what he did. 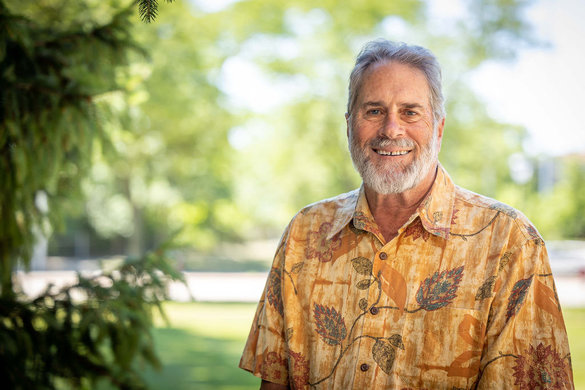 Though his textbook is now the gold standard, it originally began as a teaching tool—a series of typewritten lectures and hand-drawn graphs he developed to fill the gaps in the available literature at the time.

Dr. Grilly would “assign this book here, that book there, a part here, and a part there,” but no single text adequately covered the topic. “Finally,” he says, “I thought, ‘That's just too much. Students need one resource. I need one resource’. So, as I was developing my lectures, I started writing things out and had the bookstore make copies. Every time I taught the course, I would add something new. Eventually, I came up with a 500-page manuscript. One day, a book sales rep came by and said, ‘why don't you make this into a book?’”

More than 20 years and seven editions later, “Drugs, the Brain and Behavior” remains the authoritative text for aspiring and practicing psychologists, pharmacologists, physicians and psychiatrists. According to Dr. Conor T. McLennan, CSU Interim Associate Dean for Faculty in the College of Sciences and Health Professions, the book (co-authored by John D. Salamone in editions six and seven) is so valuable because it “integrates information from a variety of fields, including pharmacology, neuroscience, psychology and psychiatry…. It has been incredibly successful and has made an important impact in psychology and related fields.”

The enduring success of his book led Grilly earlier this year to make the largest-ever philanthropic gift to CSU’s Department of Psychology: $315,000, earmarked for the Doctoral Program in Adult Development and Aging.

The gift is a direct result of royalties Grilly earned from the sale of his book and invested over time. It’s a particularly apt way to commemorate his legacy at CSU, considering that Grilly was “instrumental in bringing the Adult Development and Aging Doctoral Program to life,” according to current Program Director and Professor Dr. Katherine Judge. Grilly served as chair of the department from 2005 to 2008. The doctoral program launched in 2009.

In aw-shucks fashion, Grilly claims little credit for the genesis of the program. He says, “I can't say I contributed that much. I mean, I was a facilitator. I made sure everybody was in line with it.”

Judge, however, begs to differ. She says, “Under his leadership, Dr. Grilly and other key faculty did all the necessary work to establish and launch the degree-granting program, including developing a vision, coming up with the curriculum, thinking through the logistics, looking for partnerships, and then of course anticipating the need for adult development and aging within the areas of research, practice and policy. That’s a heavy lift.”

According to Interim Department Chair and Associate Professor Dr. Eric Allard, in its short history the doctoral program has attracted “remarkable students and outstanding faculty” who have made “a positive impact on the field.” Grilly’s gift, he says, will further raise the program’s profile and “put [it] on the map as a center for research and scholarship in the psychology of human aging.”

Judge adds, “We've been very successful in getting our students placed in tenure-track or industry jobs. The next step, and this is where Dr. Grilly’s generous gift comes in, is catapulting the program to a national level, so it becomes known for its research and even more competitive with other doctoral programs that have been around for much longer.”

Grilly’s gift is structured to benefit the program both immediately and over time. $50,000 is earmarked for immediate use and, according to Judge, will go in part to funding a speaker series that brings national experts to CSU for presentations and workshops. The remaining $265,000 is set up as an endowment, generating roughly 5% in spendable annual earnings with the principal enduring in perpetuity. Overall, the gift will support students by funding the dissemination of their research in publications and workshops, by providing research grants, and by defraying travel expenses when students attend conferences.

Grilly’s Gift May Be Historic, but to Him, It’s Personal

Anyone who thinks Grilly made his transformative gift for fame or glory doesn’t know Dave. Judge has known known him for nearly 20 years and describes him as “down-to-earth, and very humble.” His unassuming manner belies the fact that, as she says, “he's a powerhouse. He’s had a prolific career, both in terms of research and teaching.”

His real motivation for the gift, Grilly says, stemmed from his own family situation. He and his wife Debra (whom Grilly met at CSU his first year of teaching) care for her mother, who suffers from Alzheimer’s Disease.

“My mother-in-law was this amazing, beautiful woman--inside and out. She was intelligent, verbally gifted, energetic, and fun to be with. Everybody loved her. About 12 years ago, we started noticing she wasn't functioning well. Now, she’s not even functioning at the level of a two-year old. We decided not to put her in a nursing home, so we’ve been taking care of her and making sure she's as healthy as can be. But what more can we do? Is there something we can do for other caretakers like us? For others who suffer from the disease? It's just so many heartaches that millions of people are experiencing.”

The combined sense of frustration and a desire to make a difference are what spurred Grilly and his wife to transfer his book royalties over to CSU. He says, “I thought, ‘wait a minute, CSU has a Ph.D. program that I was involved in helping to develop. If I could boost the program, boost its success, then maybe we could make a difference. So, giving the money to CSU may not [help] my mother-in-law directly but it makes me feel better because I'm hopefully helping others who are in our situation.”

Drs. Judge, Allard, McLennan, and other members of the program are using Grilly’s gift to ramp up the Adult Development and Aging Doctoral Program. As Judge says, “I'm so proud of our faculty. I'm so proud of our students. We worked really hard in our formative years to think about what we want the program to be, and what's the best way to support students. [Grilly’s] gift will transform the program by helping us tap into that next level—something that would be difficult to do without this generous gift.”