On May 11, after three years, Radiance, Cleveland State University’s premier fundraising event, returned to the campus ballroom to...

Facing the unimaginable, she yet flourishes

A couple years ago, Maci Nestlerode’s father suffered a spinal cord injury, leaving him in a wheelchair. “I never expected...

Thriving in the unknown

Chris Chajon shuns monotony, enjoying the challenge of embracing rapid and progressive change. That’s why when you ask the...

Beneath his soft-spoken, self-effacing demeanor, David Hobe, CSU B.B.A. ‘72, is a courageous, visionary entrepreneur. He and Jerry Lucas, a friend from high school at St. Ignatius, co-founded the public accounting firm Hobe & Lucas in 1978, just six years after David earned his accounting degree. Their mission was twofold: to build long-term client relationships, and to avoid making the same mistakes they’d seen other public accounting firms make. 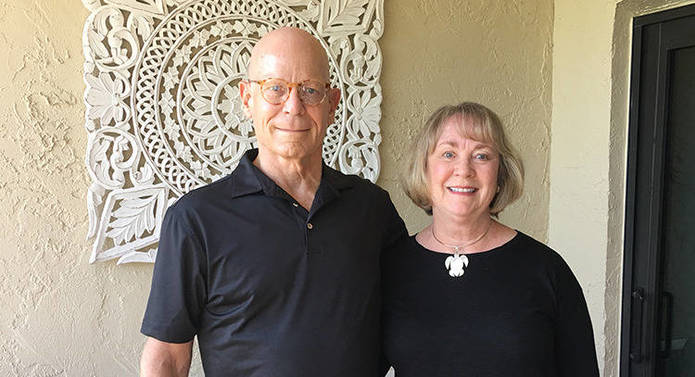 So, they designed Hobe & Lucas with an eye to developing for the future, and finding creative, affirming ways to motivate people. As Hobe says, “People have to like what they're doing and the people they’re working with.” Today, the firm embodies the supportive culture that Hobe and Lucas originally set out to achieve. Among the reasons employees give for rating the firm a top place to work is that it “fosters a culture of learning,” and it “provides a unique environment where everyone is exceptionally humble and kind.”

Hobe, who retired from the firm in 2019, cites additional proof of employees’ job satisfaction: very low employee turnover. He says, “I think there was a fair amount of professional and intellectual challenge there for everybody.”

As an accounting student who transferred to Cleveland State in 1970 from Xavier University, Hobe says he wasn’t all that engaged with student life at the time. He was a newlywed—he and his wife Mary Jo married in 1970—juggling a job at Republic Steel and active duty with the U.S. Army Reserves while averaging 20 credits per quarter for four quarters.

Hobe’s relationship with Cleveland State University has evolved and deepened in subsequent years. Now, he says, he recognizes what a major asset Cleveland State is to Northeast Ohio. “The accounting program in particular,” he says, “has been very strong. It has produced very good accountants and CPAs over the years.”

Even more important, he says, is that CSU “gives local students an opportunity to get a good college education, at a reasonable cost, that they might not be able to get otherwise. A lot of CSU students work while they attend school, so they have a good school that's close by, convenient, and relatively affordable.”

David and Mary Jo see themselves as beneficiaries of his accounting degree from CSU and his successful career in public accounting. For that reason, they decided to establish the David and Mary Jo Hobe Scholarship Fund, which will provide three annual scholarships of $5,000 each to accounting students at the Monte Ahuja College of Business.

Initially, the Hobes opted to fund the scholarship much later, through a bequest in their estate plan. But as David says, they rethought that idea, and decided “to benefit the students now instead of sometime in the future. That way, we get to see it happen.”

Hobe offers some sage advice for today’s students, in addition to his generous philanthropy. First, he says, students should know that “Everything changes. The only constant is change. And you have to be adaptable to change.”

Second is the operating principle that enabled him to co-found a successful accounting firm that has thrived for more than forty years and has grown to be one of Cleveland’s best places to work. He says, “Don't get hung up on money or advancement. Pursue whatever it is you want to do, and those other things, money and advancement, may follow. But as long as you're satisfied and happy with what you're doing, that's what's really important in life.”